Future music history textbooks will credit the video game industry with a substantial contribution to the public interest in classical performance. These days, orchestras dedicated to the soundtracks of the most beloved game titles travel the globe, bringing them to the masses in their fully orchestrated and embellished glory and easily selling out massive concert venues. It’s becoming a well-known fact that the video game industry dwarfs the film industry in size, so it’s no surprise that there would be such a high demand for these tours.

My confidence of the impact that game music will make is not just a random feeling by someone who likes gaming. Consider that one of the most important ways we remember anything about history at all is by having copies. It is astounding the sheer quantity of arrangements that are sometimes composed in honor of just one song. As much credit as film soundtracks often get, I don’t see them reinterpreted to the same extent.

This is very good for classical musicians, since it is expanding the demand for their art in an extremely competitive market, giving those with performance aspirations a better shot at a career. It is also a welcome development for any lovers of classical music who want to see the genre become more accessible to demographics who previously would not have found it easy to enter the classical performance culture. Enter gamers.

The only downside to this sudden incentive for game enthusiasts to fill the concert halls is that they generally have no idea how to behave themselves in a classical venue. If you’re an exception to this rule, it is likely because you are/were classically trained and are used to the rules of recitals and symphonies. Good for you; five stars; two thumbs up. I’m still going to unabashedly talk down to the transgressors, but I promise it’s because I love you.

Part of the reason these concerts are so special is because they honor the imagination of composers whose ideas were severely limited by the tools to which they had access during their careers. I’m talking about the SNES to PS1 era synthesized instruments which, though charming and nostalgic in their own way, are cheap imitations of the real sounds produced by physical instruments. It is these that the writers of our favorite soundtracks had in their minds, despite being shackled to retro sound banks for several decades. You could say that what we heard in the games we played was a kind of doodle or rough draft. Now, we have the privilege of hearing professional arrangements of these songs performed by masters of their art in huge concert halls, and they are not being shown due reverence.

Call me a snob, but I’m willing to adopt a modest amount of snobbery if it ensures that I am truly listening to the music. Before a month ago, I had never heard the menu theme from the Final Fantasy franchise played on a real harp. That moment was worthy of every ounce of attention I could devote to it. That is the purpose of concert etiquette.

Besides, the manners surrounding the attendance of classical performances have actually loosened up quite a bit over time. Unless you’re seeing something at Carnegie Hall, no one’s really asking for much. In general, promoters of classical music have a genuine desire for it to be accessible to everyone. By the way, I myself am not very versed in the repository of classical music, and far from a connoisseur. I have a few favorites and I can generally distinguish the classical periods, but I am a modern person who listens to modern music. So when I say I will talk down to you gamers, I mean from a standpoint of etiquette, which I learnt growing up participating in festivals and taking conservatory exams.

Before I started dating my fiancée, she took me to rock shows. Obviously there is no official dress code at a ZZ Top show, yet everyone at a ZZ Top show will still be dressed in basically the same way. Do I stick out a bit in my thrifty grandpa sweater. Yeah, probably. But does anyone care? No.

In the same way, there are no official rules about attire for symphonies these days, so you don’t have to be the sharp-dressed man at a classical concert just because a lot of others will go the formal route. But, try to dress as to avoid being a visual distraction. It is bad taste to show up in ripped jeans and a T-shirt. The Montreal Symphonic Orchestra’s website puts it the following way:

“Dress comfortably. Even if you want to make an extra effort, this is your time to relax and enjoy. Only the musicians have a dress code to respect!”

Pretty generous, no? Too generous, in my humble opinion. Venues and ensembles do have an incentive not to make anyone feel like they aren’t classy enough to buy tickets. But the very fact that the question of attire is addressed on their website proves that there is a culture associated with going to the symphony. Be cool. Wear a button-up shirt, pants without holes, and not sneakers. You’ll be overachieving.

But whatever. I don’t really care about that because I don’t have to look at you. That’s why I got it out of the way early. Let’s talk about food and drink. Concert halls will often serve alcohol in the foyer before the show and during the intermission. This is not to be brought back to your seat like it’s a movie theater. No one likes having full glasses of alcohol suspended over their heads as someone shimmies through the row, double-fisting a wine and beer. And yes, I did really see this at the recent Distant Worlds Concert in Montreal. You run the risk of spilling it on other people, and again, this is not a rock concert. The point of serving drinks is to offer a brief refreshment as people digest and discuss the first half of the performance. It is not intended as mouth entertainment to accompany your auditory experience.

I shouldn’t have to defend this point on any basis beyond simple etiquette, but just to really drive it home, let me talk about dynamic range. You may wonder why you shouldn’t be allowed to enjoy a classical performance with the same munchies as would accompany any other genre of music, or even a movie. The reason is that the dynamic range of an orchestra, or the difference between the quietest and loudest points in a piece, is extremely wide. The dynamic range of virtually any other kind of show is much more narrow, and much louder in general. I will not hear you chewing your popcorn at a Megadeth show, but if I hear a single crunch or sip during Fauré’s Pavane, I will tie a rope around your head to lock your jaw shut. In my mind.

Speaking of distraction, I went last year to see a performance of The Planets by Gustav Holst. The very last movement of that piece is actually an anomaly in the classical music world because it is one of very few that ends with a fade-out. These are of course common in recorded music because it is easy to slowly turn down a knob or fader on a soundboard until it reaches zero, and then stop recording. Live performances must be more innovative. The fadeout in Neptune was achieved by putting a choir in a little room off stage and gradually shutting the door. The same was done at the performance I attended, to great effect. It was so beautiful and eerie. But of course, with just a few seconds remaining, someone’s cellphone started ringing shattering the moment for everyone. This point requires no further elaboration. Just don’t be that guy.

Do not spam your claps. Lest your desire to prove your enthusiasm make you look a fool and ruin others’ listening experience, it is safer to let others lead the applause. There is actually a very easy way to know whether or not applause is appropriate. Look at the conductor. If his hands are up, yours are down, and there are no exceptions to this rule. Many a time performances are tainted by someone thinking a piece is over and beginning their applause all by themselves. If you do this, it makes you look like you’re more excited to make noise than listen to the music.

While I’m at it, allow me to introduce your cluelessness to the concept of movements. Movements sound like they’re whole songs, but really they’re parts of one song. The transition from movement to movement, including the empty space between them, is part of the composition. Applause between movements breaks the flow intended by the composer. You wouldn’t look at a painting one half at a time; you wouldn’t look at the background separately from the foreground. So when you hear a multi-movement piece, listen to it as one piece. You will notice that between these movements, the composer keeps his hands suspended, indicating that the musicians are still completely attentive to him, awaiting their cues. At this point, a bunch of uncultured clap-happy dunderheads usually trigger an applause. As the conductor patiently poises himself, awaiting the end of the untimely clapping, I can assure you he is silently questioning whether it was a good idea to let the plebeians into the classical world. It wouldn’t be hard to include a simple graphic on the programs illustrating this rule. I should point out the death of movements is not being carried out exclusively at game music concerts. You guys aren’t the only culprits. Actually, few arrangements of game scores end up containing several movements. Still, I’ve been to enough video game symphonies to know that overeager applause is common among you people. You people… 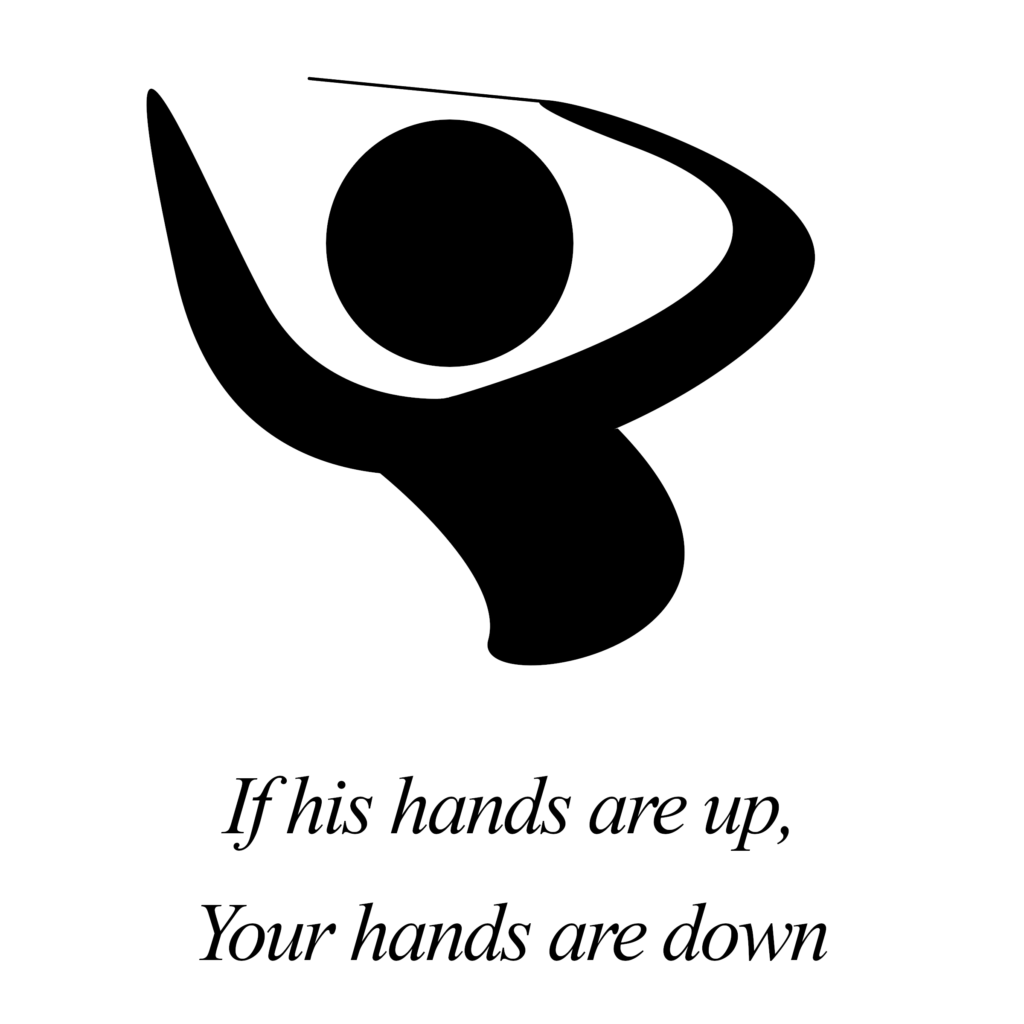 If I had to choose between maintaining a high barrier of entry to the world of classical performance to maintain its classy culture, and breaking down those barriers at the risk of losing some of the conventions that I personally see as beneficial, I would choose the latter. I am happy to see the hunger there is for great art, and game music is full of some of the greatest art. This is just my lighthearted appeal to the “barbarians” pouring into a domain that has a long tradition attached to it, to recognize that there’s a lot of beauty and practicality in the details. The bowing, the silence, the attire: these are rituals that are in place to preserve a certain attitude towards the appreciation of music.

If you put in the effort of adopting this aspect of symphony culture, you won’t just be conforming for the sake of appeasement (though I suppose you will appease me), but you will really get more out of it. Next time an orchestra comes to your area to play your favorite game music, give it a try, and be sure to let me know if it enhanced the experience for you at all.

Please check out my music as well. I won’t even make you dress up or put down your beer to listen to it.