How I miss Valencia. I have to go back. It’s not obvious to me how I managed to get such a perfect taste of it, and I can’t promise it would be as magical for you as it was for me. But, I can tell you as much as I can, and maybe you’ll understand why I would write an article about it four years after the fact just for the sake of reminiscing.

We had accommodations near Plaça de la Reina, which was even more ideal than my mother had originally thought when she booked the AirBnB. It’s a square with many cafes and restaurants, great for ducking in and out, and there’s this lovely old Torre del Micalet watching over the place. I’m not going to tell you there aren’t equally nice places to set up camp, but I will tell you that if you stay too far away, you’ll have to take a trip there anyway to visit the most renown horchatería in Spain: Horchatería Santa Catalina.

I’m sure there’s an internal debate in Valencia about which place has the best horchata, but come on. This place obviously knows how to give the tourists what they want with their ceramic theme and the traditional employee uniforms. Even if it weren’t technically the best, it would still be the best place to go for the vibe. Go before the locals wake up to avoid the rush. 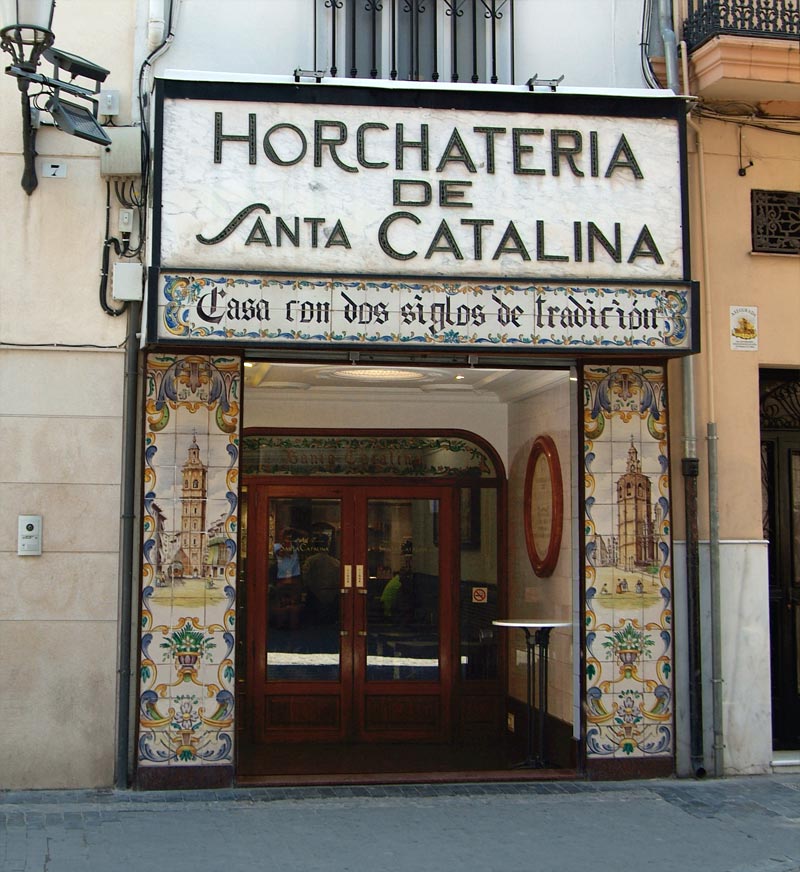 The inviting signage of the Horchatería de Santa Catalina, from their website.

But what is horchata? It is something so particular to this area of Spain, and made with such an unusual and confusing ingredient, that the batch I made upon returning from my trip was made with rancid ingredients that I did not understand. See, horchata is made with these little things called tiger nuts, which are also called earth almonds, or even nutsedge.

If you eat one, you will notice it tastes like some kind of nut. Oh, I get it. Nutsedge, tiger nut, earth almond. It’s a nut, right? Wrong, idiot. Why would you assume that and keep it for two weeks in a plastic bag and then try to make a drink out of it in Canada after they’ve rotted? It’s not a nut. It’s technically a tuber, so it’s more akin to a potato than a nut. Lesson learned: don’t assume that things that have several names, all of which contain the word ‘nut’ or ‘almond’, are nuts.

Going to Seed has an interesting article from 2010 on how to grow these things in Canada, if you’re into that.

So, if you feel like experimenting, see if you can pick up a bag of these tiger potatoes at the nearby Mercat Central, and maybe you’ll have more luck than I did with your homemade horchata. Just make sure you refer to them as tiger nuts when customs asks you if you brought back any produce.

I recommend Mercat Central simply because it’s huge and you’ll have the best selection. I’m a bit pickier when it comes to artisanal markets. Anyway, pick up your chufas if you feel like it, and maybe some bread, cheese, and meat for lunch unless you’re a real high roller, in which case you can grab something in the Plaça de la Reina.

The Túria Gardens are the logical next stop, since they’re a ten minute walk away, and because they are an essential visit due to their beauty and novelty. I try not to over-hype things; not everything in this article is an essential visit, but if you pass up the Túria, you are a fool. I did a Google search to make sure it wouldn’t be an overstatement to call these gardens one of a kind, and it really isn’t an overstatement at all. 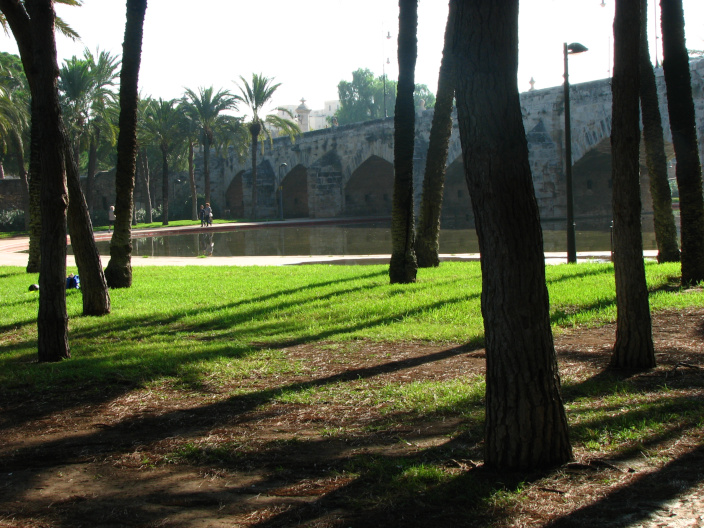 The story behind the gardens is really interesting. They were built along the bed of a river that was diverted after a flood in 1957 which destroyed 5800 homes and took the lives of 81 people. This river had apparently flooded 75 times in the last 7 centuries prior to the one in 1957, which would mean that, on average, it could be expected to flood every ten years. I can’ help but think of the words of Jesus.

“Lord, how often will my brother sin against me, and I forgive him? As many as seven times?”

Jesus said to him, “I do not say to you seven times, but seventy-seven times.“

Finally doing away with the hazard after the 76th flood, the forgiving Valencians are just one short of the biblical command. The river was diverted south of its original course, and though there was a chance of the original riverbed being turned into a highway, the public would have none of that. As their reward for their long-suffering, Valencia is now home to the most gorgeous park in which I have ever set foot. If you go to Valencia without taking a walk here, you suck at traveling.

An image from Metropolis Magazine showing the diverted Túria and the repurposed riverbed.

Part of the beauty of this city is that its modernity knows its place. I live in Montreal, and if you go to the Old Port here, you will see lots of old, but also plenty of new interspersed with the old. You can’t really bury yourself in the old here, because you will happen upon the science center, or the pirate-themed rope course, or some other modern monstrosity that sticks out like a sore thumb amidst what is supposed to be an urban time capsule.

In contrast, you can walk along the Túria riverbed for hours before reaching the City of Arts and Sciences (depending on where you begin), and when you do, it announces itself respectfully but magnificently. It’s as if it knows that you’ve been adequately amazed by the gardens, and that its turn has come to do the same. And amaze it does. 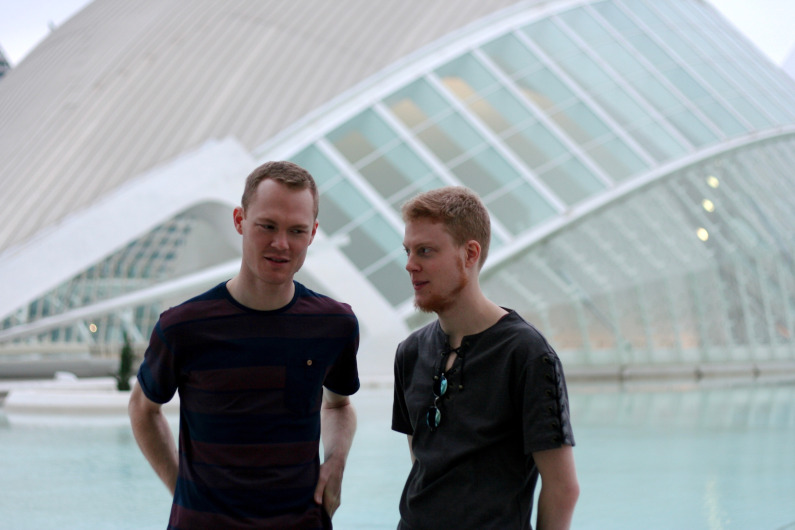 My brother and a billy goat in front of the Hemisfèric.

I can see why they decided to call it a city, and not just a centre or something. It consists of four beautiful, very modern, and very curvy buildings: the Hèmisferic, the Museu de les Ciències Príncipe Felipe, the Oceanogràfic, and the Palau de les Arts Reina Sofía. Curviness is how you know things are modern and cool because it’s like they’re trying to make a point of saying that they know how to build stuff without just stacking cubes on top of one another. I’m convinced!

I won’t go into detail about what you can do here. Suffice it to say there is something for everyone, especially the dolphin show. You can easily spend multiple days there soaking up the various exhibits, presentations, and performances. Do your research in advance and make a plan. A few hours was enough for our stamina.

Wow, you must be ready for supper after all that science. Well, I’m about to do something that no travel blogger would ever do, which is recommend a restaurant that has, on this 22nd of March, 2020, a 3.5 star review on Google Maps. Frank Beer, baby.

Sometimes, you know you’re supposed to try something, because you’re in the country that is known for that thing, but you don’t know anything about the thing. Bocadillos. We knew we were supposed to have them, but what are they? A sandwich? Looks like a sandwich to me. But do you remember how chufas look like nuts? Like chufas, bocadillos are not sandwiches. They’re their own thing. And Frank Beer had this ‘make your own bocadillo’ setup where you would choose what to put in it. I’m sure a Spanish person would have known what to put in there, but all the choices they had were things that no non-Spanish person would ever put in a sandwich, like potato omelettes. So, we decided to live on the edge and to ask them to make us two or three really typical bocadillos. They nailed it so hard. The Tesla exhibit at the museum had drained us of all our positrons and we just needed to be refueled by some bocadium molecules. They really hit the spot. 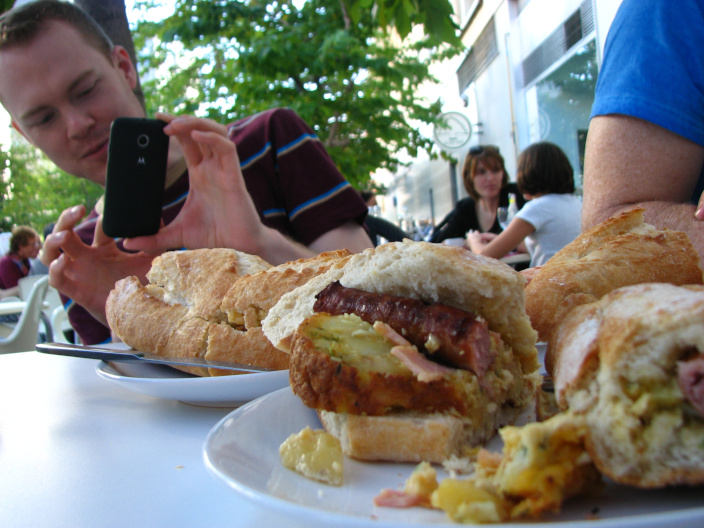 Even my brother and I struggled not to take part in the modern ritual of food photography on this occasion.

So, no matter what the review, my family and I will always be indebted to Frank Beer. This method of just asking restaurant workers what to eat is one I’ve been employing for a while. It’s funny, because it does catch them off guard and sometimes makes them visibly uncomfortable. I’m sure not everyone likes the pressure of choosing your meal for you, but otherwise you can end up guessing like an idiot because you’re too proud to just admit you have no idea what you should eat. Just ask.

This has been nothing close to an exhaustive travel itinerary for Valencia, obviously. There are many more things to do there, I’m sure, like going to the beach or checking out the Biopark. I just want anyone reading this to be aware of some of the things about the character of the city that make it really special, and if that helps you appreciate it more when you go, then I’m happy. The above itinerary took one day.

Please do let me know in the comments if you enjoyed your stay as much as I did, or just tell me about your experience in general. I hope to be back soon, so I’m all ears for recommendations as well.

And, if you’re planning a trip, and need a good vacation playlist, go listen to some of my music. Maybe when you listen again after your trip, you’ll be reminded of the adventure!